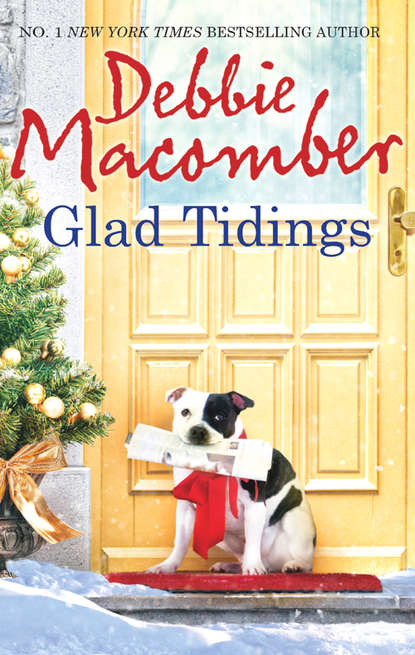 'Perfect for fans of Maeve Binchy' – CandisTwo women are ready to fall in love this Christmas season… Rookie reporter Emma Collins finally has her first big break: to interview three finalists in a fruitcake contest. There is just one problem, Emma hates Christmas…but falling in love with gorgeous pilot Oliver Hamilton might just help change Emma’s opinion of this holiday season.When rival reporter Nolan Adams criticised Maryanne Simpson’s lifestyle, she decides to leave her debutante past behind and start over. As the snow begins to fall, Maryanne finds herself a new life and falling head over heels for the man who got her into this mess…Make time for friends. Make time for Debbie Macomber.

2. An open mind when it comes to fruitcake.

As it happens, I love fruitcake, and because I do, I’m sharing three special fruitcake recipes with you in the first story, “There’s Something About Christmas.” One comes from my mother-in-law, Marie Macomber; it started out as an applesauce cake that I adapted over the years into a moist fruitcake. (The rum certainly doesn’t hurt!) The others are from two readers, Cindy Thornlow and Penny Raven, who have become friends of mine.

The second story in this set, “Here Comes Trouble,” is a romantic comedy I wrote in the early 1990s. It’s long been a favorite of mine. You’ll see that I’ve updated it a little…. I hope that, just like Maryanne and me, you’ll fall in love with Nolan.

Both stories feature heroines who work for newspapers.

The title, Glad Tidings, refers to that and, of course, to the good news of Christmas.

My wish is that these stories will make you laugh. If you enjoy them as much as I hope, please consider your laughter my gift to you this Christmas.

P.S. I love to hear from readers! You can reach me at www.DebbieMacomber.com or Facebook, or if you prefer to write me personally my mailing address is P.O. Box 1458,

There’s Something About Christmas is “a tale of romance in the lives of ordinary people, with a message that life is like a fruitcake: full of unexpected delights.”

“No one pens a Christmas story like Macomber and this is one of her best. Sweet, witty and supremely heartfelt, it’s truly special and guaranteed to warm even Scrooge’s heart.”

on There’s Something About Christmas, 4½ stars, Top Pick

“There’s Something About Christmas is a wonderfully funny, and at times heart-wrenching story of finding the right person to love at the most delightful time of year.”

“Macomber once again demonstrates her impressive skills with characterization and her flair for humor.”

“Call Me Mrs. Miracle is an entertaining holiday story that will surely touch the heart…. Best of all, readers will rediscover the magic of Christmas.”

“A fast, frothy fantasy for those looking to add some romance to their holidays.”

—Publishers Weekly on The Snow Bride

“Where Angels Go … should definitely get anyone in the mood for holiday cheer and warmth.”

“Macomber’s latest charming contemporary Christmas romance is a sweetly satisfying, gently humorous story that celebrates the joy and love of the holiday season.”

“It’s just not Christmas without a Debbie Macomber story.”

The Shop on Blossom Street

Back on Blossom Street

(previously published as Wednesdays at Four)

A Turn in the Road


There’s Something About Christmas

To Emma Ingram (the real Emma) and her mother

On that cold day I was born, in February 1955, my great-aunt gave me a classic fruitcake for the celebration of the occasion of my birth. Every year during the holidays I pull it out of the attic and take a look at it and it still looks great, and every year I try to get up the nerve to take a slice and try it.

chef of The Mansion on Turtle Creek

This job was going to kill her yet.

Emma Collins stared at the daredevil pilot who was urging her toward his plane. She’d come to Thun Field to drum up advertising dollars for her employer, The Puyallup Examiner, and wasn’t interested in taking a spin around southeast Puget Sound.

“Thank you, but no,” she insisted for the third time. Oliver Hamilton seemed to have a hearing problem. However, Emma was doing her best to maintain a professional facade, despite her pounding heart. No way would she go for a ride with Flyboy.

The truth was, Emma was terrified of flying. Okay, she white-knuckled it in a Boeing 747, but nothing on God’s green earth would get her inside a small plane with this man—and his dog. Oliver Hamilton had a devil-may-care glint in his dark blue eyes and wore a distressed brown leather jacket that resembled something a World War Two bomber pilot might wear. All he needed was the white scarf. She suspected that if he ever got her in the air, he’d start making loops and circles with the express purpose of frightening her to death. He looked just the type.

Placing the advertising-rate sheet on his desk, she turned resolutely away from the window and the sight of Hamilton’s little bitty plane—a Cessna Caravan 675, he’d called it. “As I was explaining earlier, The Examiner has a circulation of over forty-five thousand. As you’ll see—” she gestured at the sheet “—we have special introductory rates in December. We serve four communities and, dollar for advertising dollar, you can’t do better than what we’re offering.”

“Yes, yes, I understand all that,” Oliver Hamilton said, stepping around his desk. “Now, what I can offer you is the experience of a lifetime …”

Instinctively Emma backed away. She had an aversion to attractive men whose promises slid so easily off their tongues. Her father had been one of them. He’d flitted in and out of her life during her childhood and teen years. Every so often, he’d arrived bearing gifts and making promises, none of which he’d kept. Still, her mother had loved Bret Collins until the end. Pamela had died after a brief illness when Emma was a sophomore at the University of Oregon. To his credit, her father had paid her college expenses, but Emma refused to have anything to do with him. She was on her own in the world and determined to make a success of her career as a journalist. When she’d hired on at The Examiner earlier that year, she hadn’t objected to starting at the bottom. She’d expected that. What she hadn’t expected was spending half her time trying to sell advertising.

The Examiner was a family-owned business, one of a vanishing breed. The newspaper had been in the Berwald family for three generations. Walt Berwald II had held on through the corporate buyouts and survived the competition from the big-city newspapers coming out of Tacoma and Seattle. It hadn’t been easy. Now his thirty-year-old son had taken over after his father’s recent heart attack. Walt the third, the new editor-in-chief, was doing everything he could to keep the newspaper financially solvent, which Emma knew was a challenge.

“Hey, Oscar,” Oliver said, bending to pet his dog. “I think the lady’s afraid of flying.”

Emma bristled, irritated that he’d pegged her so quickly. “Don’t be ridiculous.”

He ignored her and continued to pet the dog. She couldn’t readily identify his breed, possibly some kind of terrier. The dog was mostly white with one large black spot surrounding his left eye. Right out of that 1930s show Spanky and Our Gang. Wasn’t that the name? She shook off her momentary distraction.

“I’m here to sell you advertising in The Examiner,’’ she explained again. “I hope you’ll reconsider.”

Oliver straightened, crossing his arms, and leaned against his desk. “As I said, I’m just getting my business started. At this point I don’t have a lot of discretionary funds for advertising. So for now I’ll stick with the word-of-mouth method. That seems to be working.”

It couldn’t be working that well, since he appeared to have a lot of time on his hands. “Exactly what is it you do?” she asked.

“I give flying lessons and I’ve recently begun an air-freight business.”

“Oscar and I haven’t crashed even once.”

He was obviously making fun of her, and she didn’t appreciate it. Nor did she take his alleged safety record as an incentive to leap into the passenger seat.

“Exactly what I was going to say,” Emma muttered. “Well, I’ll leave the information with you,” she said more pleasantly. “I hope you’ll think about our proposal when it’s financially feasible.”

Retrieving her briefcase and purse, she headed toward the door—which Oliver suddenly blocked with his arm. His smile was as lazy as it was sexy. Hmm, funny how often lazy and sexy went together. Considering all that boyish charm, plenty of other women had probably melted at his feet. She wouldn’t.

She met his gaze without flinching.

“There’s nothing to fear except fear itself.”

“Uh-uh. Now if you’ll excuse me, I have other calls to make.”

He moved aside. “It’s a shame. You’re kinda cute in an uptight sort of way.”

Unable to resist, she rolled her eyes.

Oliver chuckled and walked her out to her car, his dog trotting behind him. Normally Emma would’ve taken time to pet the terrier, but Oliver Hamilton would inevitably read that as a sign she was interested in him. She was fond of animals, especially dogs, and hoped to get one herself. Unfortunately, her apartment complex didn’t allow pets; not only that, the landlord was a real piece of work. As soon as she had the chance, Emma planned to find somewhere else to live.

Using her remote, she unlocked her car door, which Oliver promptly opened for her. She smiled her thanks, eager to leave, and climbed into the driver’s side.

“So I can’t change your mind?”

She shook her head. The one thing a ladies’ man could never resist, Emma had learned from her father, was a woman who said no. Somehow, she’d have to get Oliver to accept her at her word.

She reached for the door and closed it. Hard.

After she’d started the ignition and pulled away, he smiled at her—a mysterious smile—as if he knew something she didn’t.

As far as Emma was concerned, she’d made a lucky escape.

Her irritation had just begun to fade when she returned to the office and walked down to her cubicle in the basement, shared with half a dozen other staff. The area was affectionately—and sometimes not so affectionately—termed The Dungeon. Phoebe Wilkinson, who sat opposite her, glanced up when Emma tossed her purse onto her desk.

“That bad?” Phoebe asked, rolling her chair across the narrow aisle. She was one of the other reporters, a few years older than Emma. She was short where Emma was tall, with dark hair worn in a pixie cut while Emma’